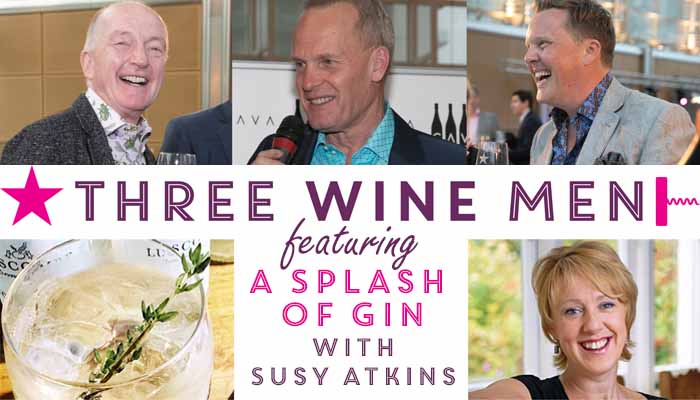 In response to the explosion of interest in artisan gin, Three Wine Men will introduce ‘A Splash of Gin’ to three of this year’s events.  Now recognised as one of the UK’s premier gin experts, Susy will head up the gin area at the Cardiff, Manchester and London Tastings.  She has hand-picked a select group of premium gin producers to present their gins to those with a curious palate.  Susy will also be running a series of gin masterclasses to give visitors to the events more insight into the art of distillation and the different styles available.

About launching A Splash of Gin with Three Wine Men Susy said:

‘I’m so pleased to be working with the Three Wine Men at the Cardiff Autumn and Manchester and London Christmas shows, bringing an exciting new dimension to what are already hugely successful and popular events!  Gin is, of course, the spirit of the moment and after five years of writing and lecturing on this subject I have hand-picked some of my favourite premium gins to showcase.’

Susy now writes a regular weekly column for the Sunday Telegraph stella magazine and is the drinks editor of delicious. magazine.

Her books include Wine Wisdom, How To Choose Wine, Wine Made Easy and the best-selling, fun pocket-book Girls’ Guide to Wine. She has won both the Glenfiddich Food & Drink award and the Prix du Champagne Lanson wine writing award for her books. In 2014 she won a prestigious Champagne Louis Roederer International Wine Writers’ Award for best short wine column for her work in Stella magazine and in late 2016 she was awarded Rioja Communicator of the Year at the 2nd annual Rioja Recognises awards in London.

Susy is familiar to many wine & food lovers as a regular wine expert and presenter on BBC1’s flag-ship cookery show Saturday Kitchen, which attracts 2 – 3 million viewers each week. Before that, she was a resident wine expert on Channel 4’s Richard & Judy. She has also appeared as a guest on TV’s Market Kitchen, UK Food channel programmes such as Great Food Live, and broadcast numerous times on BBC Radio 4 for programmes such as Excess Baggage, Woman’s Hour and The Food Programme.