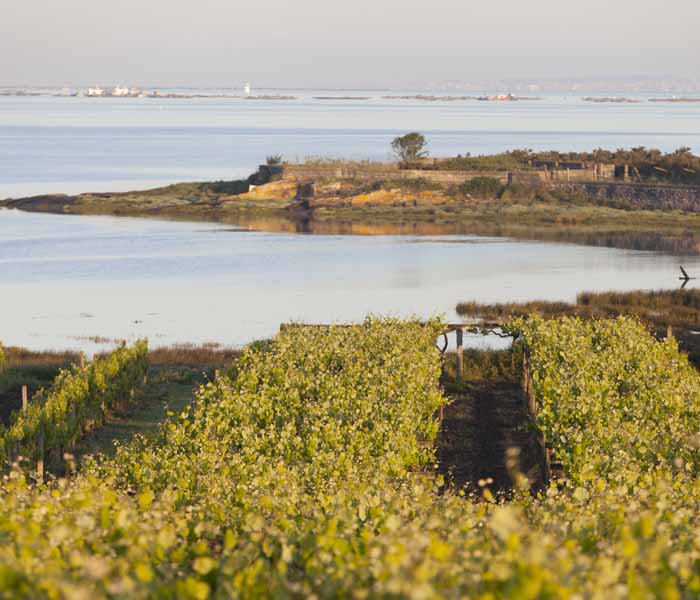 Rías Baixas is without doubt one of my favourite wine and food destinations to visit. In Galicia, the far north western corner of Spain, nestled directly above Portugal, Rías Baixas has a climate more cool, drizzly and misty than the sunseekers in Marbella could conceive Spain being capable of.

This is a region of lush and verdant rolling green hills and craggy, rocky Atlantic coastlines. Small towns with stunning granite-hewn castles and monasteries peppering the route of the famous Camino de Santiago. Right in the region’s centre, is Pontevedra, a perfect base of cobbled streets, traditional cafes and tapas bars. From there, you can head in any direction, any day and you’ll be tripping over Albariño vines before you know it.

Although, actually you’d do well to find a vine you could trip over, as a huge number of Albariño vines are grown high up, above head height on pergolas. The tradition in this region is to create a canopy of vines, with the fruit growing high above the humid mists and for pickers to walk below this ceiling of sprawling vines at harvest, hands raised high to pick the ripe white grapes. Pergolas have a second benefit in a region of tiny smallholdings, where vine growing is a part of traditional life. Beneath the canopy, you will often find vegetables growing, or pigs and other animals being reared. This is a region where winemaking is in the bones and touches every member of the community. Rarely have I felt the connection between wine and local culture so intrinsically, naturally linked, as when I visited Rías Baixas.

Now, I haven’t mentioned much about that Altlantic coast… and to talk about Rías Baixas without the cool, breezy Atlantic’s influence would be a half-job. The ‘Rías’ in the name refers to the five shallow inlets running inland from the ocean. They are rocky fjords where the salt-water rushing in and freshwater from inland mix and create a unique environment. Above the water, these Rías bring mists and cool the region further – giving the damp, humid, moderately temperate climate that Albariño grapes adore. Below the water, these Rías bring octopus. A local delicacy and the perfect partner for the wines. All along the coastline, incredible fresh fish are caught and the restaurants of Galicia do a fine trade in some of the world’s greatest seafood.

Albariño. What a grape. Born in the northwestern Iberian peninsula and producing the vast majority of the wines in the region, this is its true home. White, relatively thick-skinned which makes it well protected in the damp Galician climate and perfectly matched to ripen in the moderate sunshine. I love it for it’s bright, energetic character – it’s always electric! Fresh lemon, lime, peach, nectarine and often pineapple – tropical characters abound. It’s a superstar on its own, but can be elevated in complexity through a little oak use or some stirring of the lees to add weight and richness. There is even a unique local skin-maceration technique called ganimede pioneered by legends Mar De Frades to try out. It demands exploration!

Albariño is a perfect partner for seafood, anything that you can catch in a net will sing alongside it’s fresh, citrus zing – it especially loves a little salt in a dish to bring out the bright fruit in the wine. The local speciality of grilled octopus, drizzled with lemon juice and olive oil and finished with paprika is the perfect match if you’re cooking proper. But, a glass of Albariño with a handful of almonds and olives as a snack is about as good as it gets too. These are wines to be enjoyed with friends over a good chat. Sociable, upbeat, high-quality whites that should be part of your own food and wine culture too!

Tom will be hosting All About Albariño live online at 7.30pm on 1st October. He will be tasting two great examples of Albariño from Rías Baixas; Martin Codax and Pazo Villarei. The tasting pack includes a jar of Gordal olives and skin-on Valencian almonds to enjoy alongside. Gastronomic! Tickets available here.

Find out more about this incredible region and its wines at riasbaixaswines.com or check out this list of Albariño from Rías Baixas available in the UK and stockists.