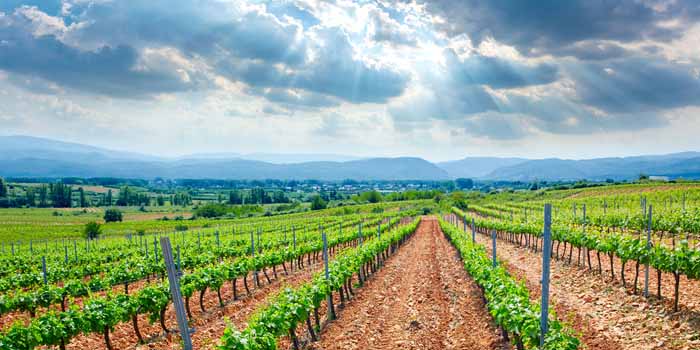 Castilla y León is predominantly red wine country. With its continental Mediterranean climate, long, dry summers and warm autumns, how could it be otherwise? This doesn’t mean that whites are irrelevant, as those of you who attended our second virtual tasting will be aware. And yet, for the all the success of Rueda in particular, it is the reds that occupy centre stage.

Tempranillo is the most planted grape in these parts, although it sometimes travels under an assumed name such as Tinta del País in Cigales, Tinto Fino in Ribera del Duero and Tinta de Toro in – guess where? Overall, it accounts for over half of the region’s 69,970 hectares. You can also find decent quantities of Cabernet Sauvignon, Garnacha, Mencía, Merlot and Syrah, as well as lesser amounts of Alicante Bouschet, Bruñal, Juan García, Prieto Picudo and Rufete. Despite Tempranillo’s dominance, the region is as diverse as it is expansive.

I don’t want to diminish the quality of what is produced in denominaciones de origen such as Arlanza, Arribes, Cigales or the Sierra de Salamanca, nor indeed the dozens of impressive reds that are grouped together under the Vino de la Tierra de Castilla y León banner, but the three most important DOs in Castilla y León are Bierzo, Ribera del Duero and Toro. All three produce a little white wine, too, although Ribera has only been allowed to do so since the 2019 vintage.

In terms of size, Ribera is by far the biggest with 23,352 hectares and still growing, ahead of Toro’s 6,000 hectares and Bierzo’s 2,854ha. It would also be fair to say that Ribera is the most prestigious of this trio, partly because of the presence of Dominio de Pingus and Vega Sicilia, arguably Spain’s top two red wine estates, within its borders. In fact, you could make a case for arguing that Ribera is the country’s leading source of fine wine overall, even if producers in Rioja might disagree with you.

Ribera also dominated the line up of wines that were entered for my tasting, with around three quarters of the samples. Despite its reputation as a region that produces full-throttle, oaky wines that are built to age, Ribera makes lots of different styles, depending on altitude, aspect and soil type, as well as grape varieties. There’s definitely a move under way towards fresher, less oaky styles.

And with influence of global warming, high altitude vineyards that were once considered marginal are now producing appealingly balanced wines. A good example of this is the 2017 Dominio Basconcillos Viña Magna, which comes from one of the highest sites in Ribera. The other interesting thing about this wine is that – just like Vega Sicilia – it contains some Cabernet Sauvignon. It’s an impressive wine from one of my favourite recent vintages.

If Ribera’s wines are often pretty concentrated, despite the shift in style, then those of Toro, close to Spain’s border with Portugal are doubly so. Well, that’s their reputation at any rate.  Here too, a lot of producers are picking earlier and extracting less from the thick skins of Tinta de Toro to make more refined, less chewy styles. Despite the fact that it packs a fairly hefty 15% alcohol, the 2016 Elías Mora Crianza from Victoria Benavides fits the bill, showing an appealing brightness and chalky freshness beneath its glossy, imposing surface.

By way of contrast, Bierzo is nothing like Ribera del Duero or Toro. It doesn’t use Tempranillo for a start; Mencía is the leading grape here, sometimes blended with other things such as Alicante Bouschet (known as Garnacha Tintorera locally) and even the white grapes Godello, Palomino, Doña Blanca and Malvasía. Parcels are small and often isolated and there’s a feel to the region that owes as much to Burgundy as it does to other parts of Spain. The DO is something of an outlier in Castilla y León, both geographically – it’s close to Galicia – and stylistically, producing lighter-bodied reds.

I love the complexity, elegance and finesse of the best wines, so I was delighted to come across a new young producer during my tastings. José Antonio García’s 2018 Aires de Vendimia comes from 70 to 100-year-old vines in Vatuille de Abajo and is wonderfully silky, scented and subtle. My kind of wine!

And join Tim on Thursday 10th December as he tastes and talks his way through his selected wines with the winemakers – more details here.